The Southern Alps enjoy the Mediterranean climate of the South.
Naturno / Naturns is one of the driest regions of the entire Alps thanks to its location at the foot of the Texel Group Nature Park.
With a sensational 315 sunny days a year, the mild climate is perfect for both outdoor fans and activity enthusiasts.

Your accommodation at the Preidlhof is blissfully situated between alpine meadows and palm trees. The climate in South Tyrol is exceptionally mild and seduces you into the southern Dolce Vita lifestyle in spite of its proximity to the mountains. Not only grapes grow here, palms and citrus trees are also aplenty. Rare alpine plants thrive on lush alpine meadows a little further up. The eternal ice is also in abundance in South Tyrol, impressive glacier landscapes hide precious pearls of nature.

The Texel Group Nature Park is the largest nature park in South Tyrol with an area spanning 33,430 hectares and also the most diverse. A paradise for nature lovers, leisurely connoisseurs and adventure-hungry mountaineers.

The expanse stretches out to 1,200 metres to rustic alpine farm estates between chestnuts and cypresses. As you head higher approaching 1,500 to 2,000 metres, you will encounter lush larch woods and extensive alpine pastures until finally reaching the high alpine lake district. The Spronser Lakes can also be found here – in the heart of the Texel Group, which impresses as the most beautiful nature park in South Tyrol with its abundance and variety.


The nature park and you - highlights for our guests

The Texel Group is a jewel for hikers and nature lovers. The paths and steep trails in the nature park are properly and attentively marked and sign-posted, so that you can hike through the entire area without encountering any major orientation difficulties. Each hike imparts the visitor with fascinating images of the natural landscape, a variety of fauna and flora, an abundance of diverse views of the glacier mountains of the Ötz Valley and Ortler Group and, of course, the Dolomites both up close and afar.

In a nutshell: the hiking world of the Texel Group offers the entire range of symbiosis you would expect in South Tyrol - from the sub-Mediterranean vegetation zone as far up to the eternal ice. 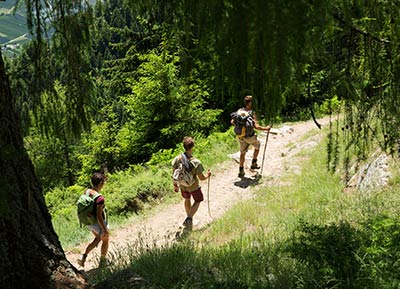 The fauna and flora

The variety of climate zones corresponds to the diversity of habitats. The alpine plateaus with the many lakes offer ideal biotopes for many species of birds.

The Texel Group is home to one of the largest wildlife populations in South Tyrol. Chamois, ibexes and marmots can be observed alongside roe deer and red deer. Many Mediterranean animal species live further to the South, such as green lizards, dormice and mantises. Fish scrimmage around in the streams while golden eagles do their turns above in weightless elegance.

The plant world is equally diverse. Vines, fruit and chestnut trees thrive in the fertile valley basin. The southern slopes are covered with mixed forests and splatterings of pine trees, while extensive larch forests stretch across the steep, rocky slopes. Spruce forests dominate the area above 800 m. A belt of dwarf shrubs with scattered alpine roses, blueberries and striped daphne can be found between the forest boundary and the alpine grass heaths. Edelweiss, phyteuma hemisphaericum and gentian can be found above the tree line alongside alpine grass. 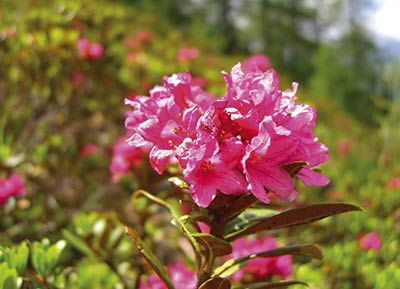 The nature park belongs entirely to the Central Alps from a geological perspective. One of the rock types found here is the Ötz Valley crystalline, which forms the main crest, and the Stubai crystalline in the surrounding area of the Timmelsjoch. The main rock types include gneiss with different proportions of biotite, quartz and garnet mica schists. The gneisses and mica schists are occasionally embedded with marble.

Around 70 different minerals have been documented in this area, such as rock crystal, apatite, calcite or fluorspar.

The Granatenkogel deserves a special mention here, since it is known throughout collectors’ circles because of the beautiful, large garnets found there. The Texel Group region is very rich in water thanks to the significant storage capacity of the widespread loose rocks and the vast ablation of the glaciers.

The Spronser Lakes form the heart of the area and showcase a unique image of scenic natural beauty combined with the surrounding three thousand metre peaks and the alpine meadows below. 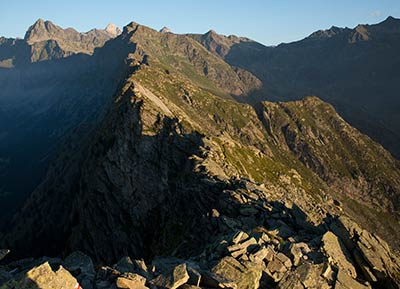 and fun at the Preidlhof

The wonderful nature of the Merano region is a paradise for athletes and activity enthusiasts. Whether you are an ambitious mountaineer, casual hiker or mountain bike fan – the mountain scenery surrounding the Preidlhof leaves no wish unfulfilled.

from 02.02.2020 until 06.02.2020
Enjoy the mild sun, the Mediterranean landscape during snow-free hiking tours in the valley and experience the white winter in the mountains with...
to the Package

from 21.03.2020 until 08.04.2020
Time for love, wellness at its best, paired with Dolce Vita, XXL SPA opening hours advantageous Naturno Greencard included!
to the Package

from 28.03.2020 until 04.04.2020
The South Tyrolean three thousand metre peaks still wear white snow caps, but in the valley the daffodils are already in bloom - the first heralds of...
to the Package

from 28.03.2020 until 05.04.2020
Breeze in the spring sunshine Start of the season with Swiss road world champion Oscar Camenzind, Giro and Tour favourite and world champion Alex...
to the Package

from 08.04.2020 until 17.04.2020
Adults only also in the holiday season!  Dreamlike days with beautiful spring weather. Enjoy the sun in the Mediterranean park under olive trees with...
to the Package

Hiking at the irrigation channels

from 26.04.2020 until 02.05.2020
Guided e-bike tours through the blooming meadows around Merano and a stop at traditional snack stations - the Mediterranean spring entices with mild...
to the Package
7 Nights
From € 1323

Join us dancing in May

Adventure weeks in the nature park

from 25.07.2020 until 29.08.2020
At Hotel Preidlhof you will find one of the largest pool landscapes of South Tyrol with a Mediterranean park, romantic corners and 6 pools. Unlimited...
to the Package

from 05.09.2020 until 26.09.2020
The most beautiful season in South Tyrol, pleasantly mild climate, lush vineyards and mature orchards invite you to excursions and our huge pool area...
to the Package
7 Nights
From € 1183

Cuddly wellness autumn. Finally, it’s time for love, in addition, wellness and relaxation paired with Dolce Vita feeling and endless cuddling!
to the Package
7 Nights
From € 1183

from 17.10.2020 until 22.11.2020
Wine lovers and connoisseurs get their money's worth during these weeks. You will enjoy weekly wine tours with tastings, gourmet gala,...
to the Package